Supporting Britain’s foreign policy and its NATO commitments sometimes requires a rapid response from the British Army. “My department is charged with exploiting internet technology to improve communications,” explained Major Adam Anderson, SO2 Internet. We’re very conscious that virtually all soldiers have mobile phones and we’re keen to explore the potential uses for SMS messaging.”

In its role as the Army’s Spearhead Lead Element, 2LI is the UK’s highest readiness battlegroup, capable of responding to a call-out within 24 hours worldwide. Rallying the troops in the event of a short-notice mission could become a matter of pressing a button on a PC, using the dedicated ArmyNET system, to send SMS messages to hundreds of individual phones. PageOne Connect also allows officers to check whether their soldiers have received their messages and to receive replies to messages that have been sent.

Military applications clearly demand high levels of security and resilience – areas where PageOne has a tried and tested track record. 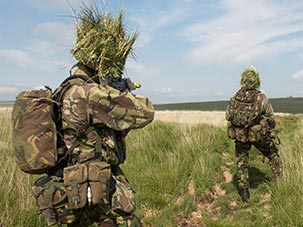